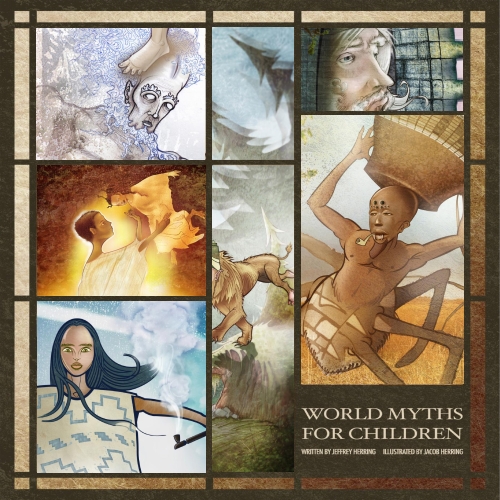 Jeffrey Herring wrote these wonderful versions of several world myths for children to enjoy. He and his family read the stories, added the music and sounds, and painted the beautiful pictures in the book. This is a delightful gift for you from the Herring Family! Myths are traditional stories created mostly by ancient people and usually to explain the world around them. Ancient people did not understand the world, so they created myths to explain it. Almost all cultures have myths to explain things like the seasons, the beginning of the world, the creation of people and other animals, birth and death, the stars, and other things that puzzled them. These stories were passed on from generation to generation. In the beginning, people accepted their myths as true histories and valid explanations. As people began to understand their world more and learned that their myths were not real, the myths were saved as entertaining stories. These stories tell things about the early people who created them. In that way the myths preserve their cultures. This is brought to you by Kazoomzoom.com. Visit the website for more fun, free stuff!